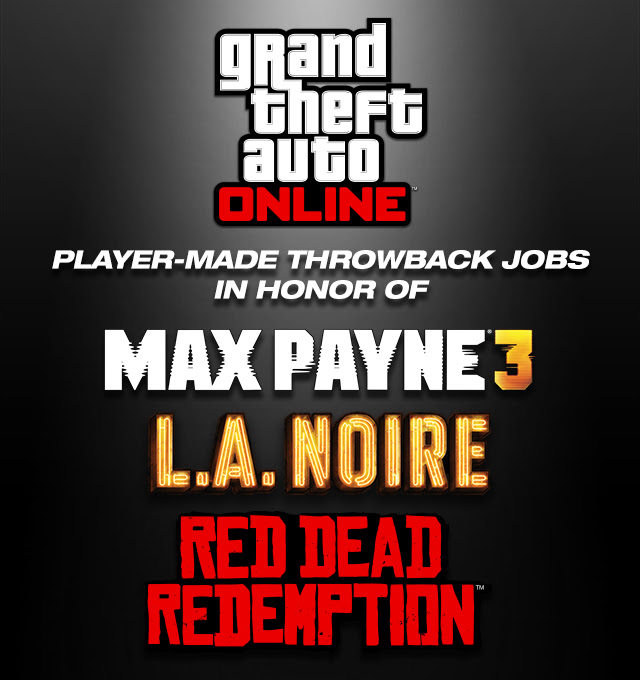 Our latest round-up of player-made GTA Online Jobs features creations inspired specifically by a trio of past Rockstar titles – Max Payne 3, L.A. Noire and Red Dead Redemption.
Read up on each of these Jobs in the descriptions below, and go ahead and Bookmark them on Social Club for easy access next time you boot up GTA Online. If you have any Jobs of your own that were inspired by Rockstar titles, feel free to share them with the Social Club community in the comments section or tag them with "throwback" on Social Club to make them easy to find.

The Jobs we found inspired by Max Payne 3 just happened to be on PS3, PS4 and PC. If you've made or seen a great Max Payne themed Job for Xbox One or Xbox 360, please share it in comments.
Horse Track Shootout by Claybigk (PS3 & PS4)
In Max Payne 3, it didn't get much better than shoot-dodging down the Galatians Stadium bleachers, picking off members of the Cracha Preto with dual wield PT92s. ClaybigK has created a Job in the stands of the Los Santos horse track that immediately recalls that particular moment. There is precious little cover out there amongst the cheap seats, and with no Passos to cover you with a sniper rifle, you'll need to move quickly to grab one of the SMGs or Body Armor and get the jump on your opponents.
Vespucci Alley by darthdrillbit (PC)
The wonderfully named darthdrillbit has taken inspiration from the classic Max Payne 3 multiplayer map Hoboken Alleys, going so far as to pick ambient settings that really match the mood of Max's miserable booze-soaked nights in Hoboken. The map itself is well thought out with lots of hidden Pickups and respawn advantages. We particularly like the way that the best Weapons only become available to players that respawn, ensuring that (unlike São Paulo) there is a continual switching between the haves and have-nots. Incredible to think that this is darthdrillbits first and only Created Job on PC. We hope to see many more.
Max Payne by Bot_Tobias (PC)
It's impossible to read the description of Bot_Tobias' Job without instant recall of Max Payne's world-weary growl: "A memory fades into my mind. Sounds of gunfire from a place I once called home. Instead of fleeing the scene I stay and fight. The sounds are the best remedy to fix my tormented soul more so than the painkillers and booze". With the tone firmly set, you'll find yourself thrust into a well-balanced and expertly restrained Job, with just a smattering of Health and Armor Pickups and a clear focus on short-range weaponry that encourage continual intense street battles.

The Jobs we found inspired by L.A. Noire just happened to be on Xbox 360 and Xbox One. If you've made or seen a great L.A. Noire themed Job for PS3, PS4 or PC, please share it in comments.
Traffic Duty by TommyGunGamin (Xbox 360 & Xbox One)
TommyGunGamin takes inspiration from Cole Phelps' ascension to the Traffic desk in this battle of the mafiosos: "It's the 1940's, and it's a nice sunny day in L.A. Seems like 2 mobs aren't getting along so well. You better finish your argument before Cole Phelps and the L.A.P.D arrive." This TDM leaves you on the outskirts of Los Santos to battle it out on the streets. With Roosevelts strategically placed around this close-quarters map, teams must work together and keep on the move to overtake their rival mob before the fuzz catch on. Strategic thinking will take you far in this layout, use the Roosevelts to plow into and distract the other Team in order to allow your teammates to fill your rivals full of lead.
The Red Lipstick Murder by TheInsaneHatter (Xbox 360 & Xbox One)
Lieutenant of the Los Demonios MC SA Crew, TheInsaneHatter, brings us back to Cole Phelps' first Homicide case after his big promotion. L.A. Noire aficionados will remember that The Red Lipstick Murder assignment required you to investigate a woman's dumped body on Moors Hill. The same hill is the setting for this point-to-point race up the winding roads into Vinewood Hills. Watch your speed in the Sports Classics or you'll overshoot and find yourself rolling down the wrong side of the Vinewood sign.
LS Noire by MattuFarlygard (Xbox 360 & Xbox One)
Leader of the Brommunists Crew, MattuFarlygard, invites you to "Relive your days as Cole Phelps in this Point to Point race." The use of Roosevelts and unusual route give this race the intense feel of a '40s police chase from the Vinewood sign to Lake Vinewood. While the Roosevelts can take on high speeds with their V12 engines, be mindful of the twists and turns winding through the map or you'll spin out and lose it all.
The Meeting Place by AbbyHepC (Xbox 360 & Xbox One)
newLEGACYinc member AbbyHepC reminisces about Cole Phelps' last case on the Vice squad. The Meeting Place looks back on Phelps' Manifest Destiny case; investigating a triple murder in an alley outside a Hollywood club. The Meeting Place invites you to reenact the shootout that eventually lead to Phelps transferring to Arson in this Deathmatch located in a dingy alley near Backlot City. With spaced-out spawn points, this map is best played with the maximum amount of players.

John Marston's Memorial by bobo351975 (Xbox 360 & Xbox One)
bobo351975 takes us over to the O'Neill house and instructs 'to wear your cowboy hats and boots in this Deathmatch. With an unmistakable western feel, including Pistols galore, this one is great fun both in teams, and as a free-for-all. Take advantage of the plethora of Health Packs and Weapon Pickups to keep you properly juiced up.
Armadillo by abeuz91 (PS3 & PS4)
Commissioner of the LES FRERES D ARMES Crew, abeuz91, appropriately sets this Capture on Cholla Springs Ave. with plenty of Micro SMGs to go around. In true outlaw fashion, steal your rival gang's loot and bring it back to your hideout before you prematurely meet your maker. Although it's tempting to go for the weapon and health pickups, a straight shot down the avenue can put you right into hot water. Attack from all sides to increase your chances of grabbing a Bag.
mentirosos y tramposos by x_rata-parda_x (PC)
x_rata-parda_x's love for Red Dead not only includes creating Jobs inspired by the game, but he also rolls out with the Red Dead Rustlers Crew. This TDM is named after the Liars & Cheats Pack, and fittingly supports up to 16 players duking it out around the Grand Senora Desert's large boulders. Break off in pairs and work together to take down the opposing team, but be sure to watch your back for enemies respawning behind you.
Red Dead, Ridge Racing by W1LDCARD1 (PS3 & PS4)
Commissioner W1LDCARD1 of the Sons of Anarchy NQY Crew created this Race with clear Red Dead influences. The route takes you around and into Raton Canyon on your (iron) horse. Keep the default setting to GTA so you can be the gun-slinging desperado that would make John Marston proud. Beware, it is very easy to miss the finish line as you take the final plunge into the canyon - a mistake that could easily cost you the race!
Posted by Unknown at 11:03